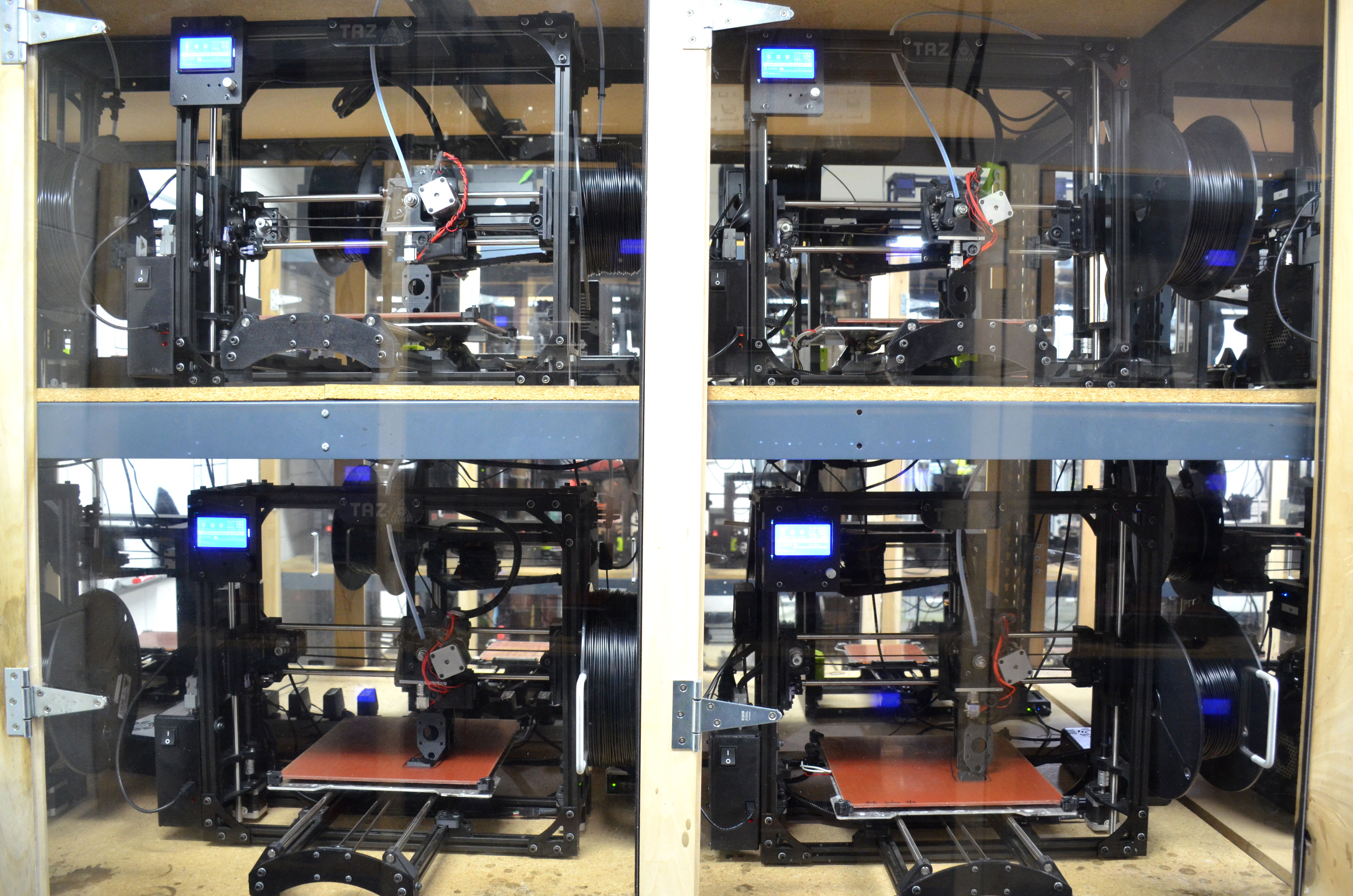 With 140 3D printers and more than 100 hours of operation per week, the Cluster at Aleph Objects, Inc. in Loveland, Colorado, USA is made up of LulzBot® 3D printers essential to the company's production process that have recently 3D printed its one millionth production part.

“We print a myriad of different parts for use in between the two main projects of TAZ and Mini, and tool heads (Dual Extruder, Flexystruder, Dual Flexystruder, and single tool heads),” Stan Middlekauff, Cluster production supervisor, said.

Since a variety of parts are needed during production, flexibility is essential to the Cluster's success in meeting those demands. High production volume and flexibility are made easier by 140 BeagleBone Black boards (one for each LulzBot 3D printer) and one System76 workstation running Debian (controlling all 140 of the machines via Ethernet). Combined, these technologies make operating and monitoring the Cluster more efficient.

“The alternative to having Cluster producing those parts would be injection molding everything, but the injection molding cost for a die could be thousands of dollars and upward,” Middlekauff said. “With the Cluster now in place, the up-front cost has been paid for us to make any type of part. Plus, if at any moment in time we need to change a part, we can change it quickly.” 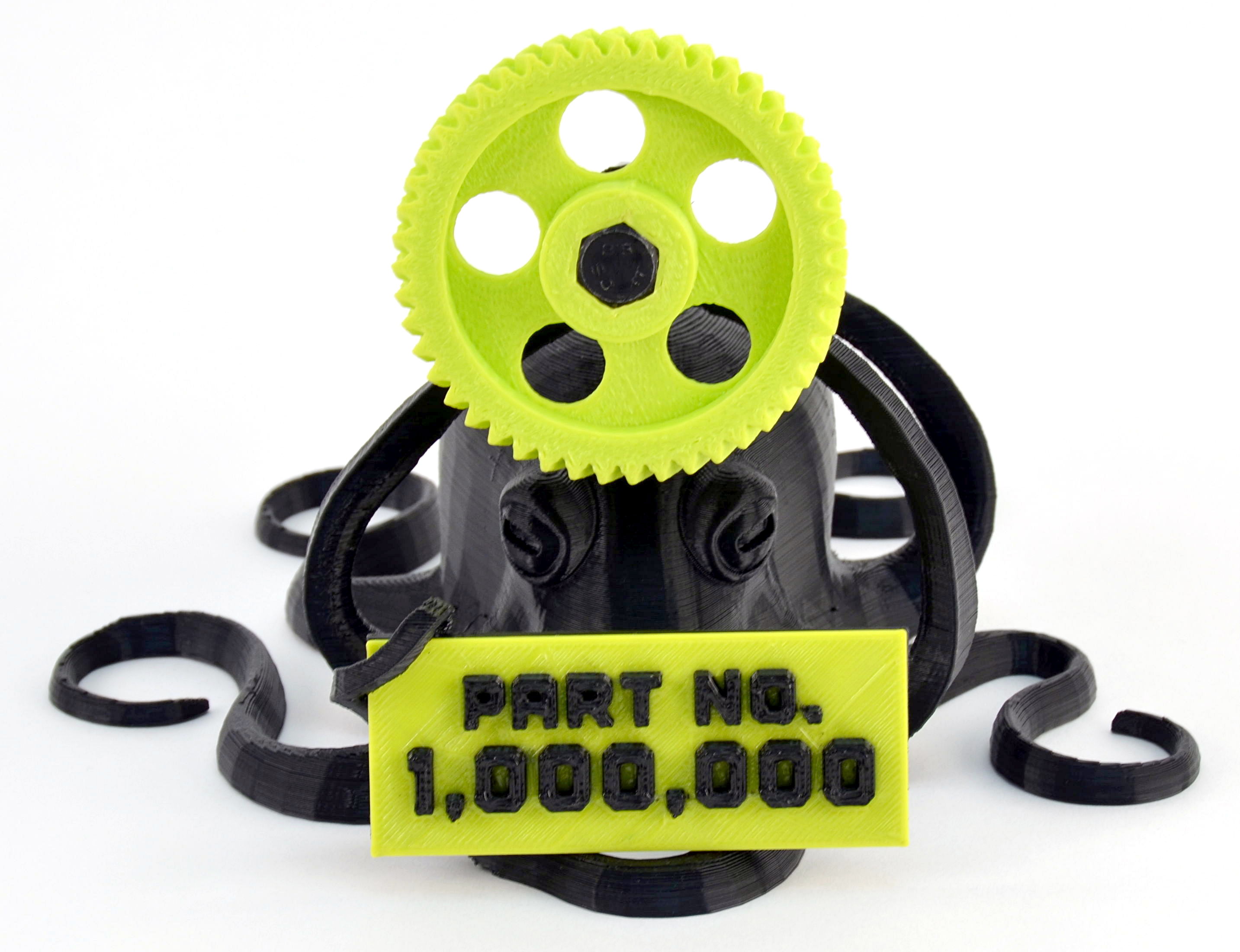 The efficiency of the Cluster has allowed the company to scale. This is evident with the Cluster's February 2016 milestone of printing the one millionth part that makes its way into production.

The part is a large herringbone gear and will remain on display at Aleph Objects to commemorate the significance.

It took over 2 1/2 years to print the first 500,000 parts. Aleph Objects now prints at a rate of 500,000 parts per year. This increased efficiency was made possible by upgrading to new models of LulzBot 3D printers, adding more machines, expanding operating hours, and adopting new technology to make operating and monitoring the machines more efficient.

Beyond printing parts, the Cluster also serves as an educational component and experimentation field for employees within the company itself, particularly with Technical Support Representatives (TSR) and Research and Development (R&D) efforts.

“A few of the people who started in Cluster have moved to TSR because over a two-month period, they can gain more experience on the printers themselves than most of our customer base would have within a year,” Middlekauff said. “On the R&D side, Cluster is itself a long-term test environment for harsh conditions of our printers to see durability and longevity, and also an individual piece-by-piece testing structure for any changes that need to be made or want to be made.”

To learn more about how the Cluster works, email sales@lulzbot.com. You can also attend the public company tour that takes place every Friday at 2 p.m. Mountain time (holidays excluded) to see the Cluster in action and the employees who are needed to keep it running.

'The Cluster is capable of meeting high expectations for quality, but without the people that are in there, it's just a bunch of machines,” Middlekauff said.

Learn more about the company's one millionth 3D printed part by reading this press release.