Whether animating films or hosting developers for the Blender Foundation, the Blender Institute in Amsterdam, the Netherlands is one of the leading voices in the Free Software community. Their primary project, Blender, is a full 3D creation software suite that supports the entirety of the 3D pipeline from modeling to game creation. The Blender Institute chooses LulzBot 3D printers to create engaging art that is accessible to everyone.

“The reason why the Blender Institute is here is because we wanted to have artists and developers working on Open Source Software. They should work together on projects so that we can improve the software and at the same time make sure that it works for everyone, that we don’t keep breaking it, and that there is defined goals to drive the software forward,” Andy Goralczyk, art director at the Blender Institute, said. “Everything that we do is going to be Creative Commons. It’s going to be online and we have a platform called the Blender Cloud and there we publish everything that we do.”

Experimenting and sharing printable files for the Blender Cloud are two ways the Blender Institute is using a LulzBot 3D printer right now. In the future, they are interested in using 3D modeling and printing for more tangible character development.

Two particular characters available on the Blender Cloud and printed on the LulzBot Mini 3D printer are Big Buck Bunny, one of their most recognizable characters, and Agent 327, a comic book character originally created by Martin Lodewijk.

“It’s a very refreshing style because we haven’t really done anything on that level yet,” Goralczyk said, referring to using a character from the community. “All the productions we did so far were Blender Institute exclusive. … We developed the characters and we came up with everything, and now we have to make something that’s based on an existing source material.”

[Watch a collection of work produced at the Blender Institute.]

Agent 327 was a large print and separated into seven different parts that were then assembled and sanded and smoothed, post-processing techniques used for their statues after printing them. In general, the Blender Institute uses filament such as ABS, PLA, and colorFabb nGen.

“We’re working hard to make our prints not that solid, so we don’t use a lot of material at all,” Goralczyk said. “It’s really affordable because it’s a really high-quality machine. … [LulzBot 3D] printers are just really well-built in general, so I think it’s definitely worth it and the price is great.” 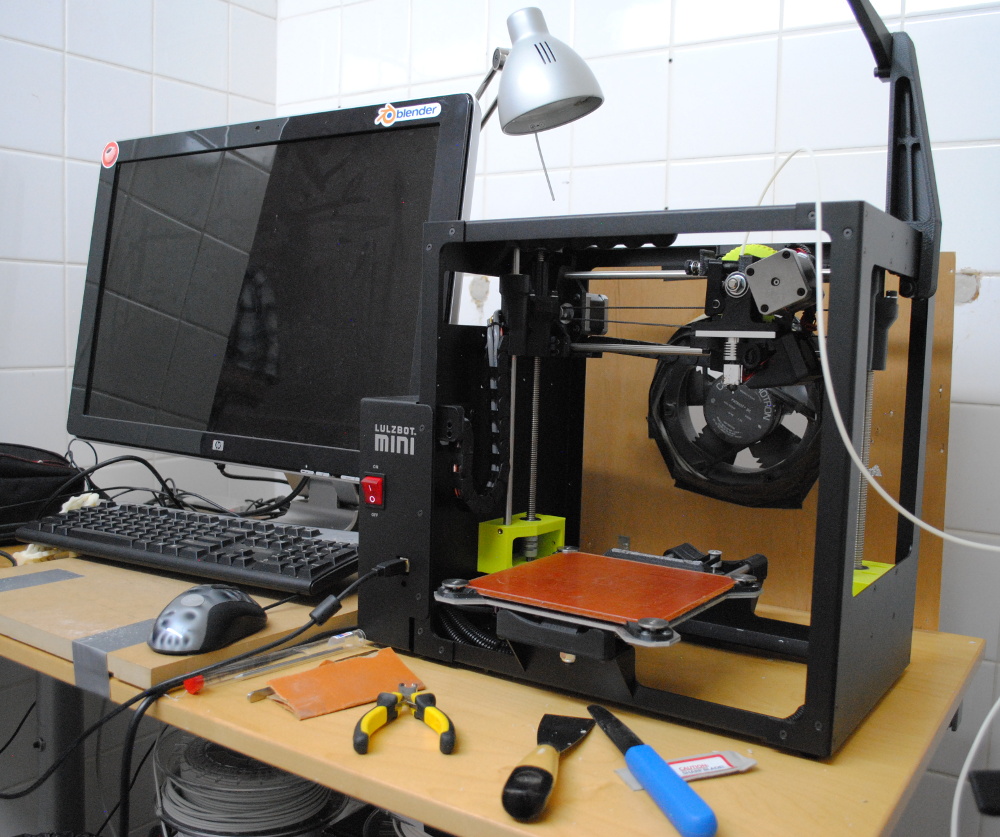 Ease of use with the machine is an added benefit.

“I’ve used various other printers before, so I think right now the LulzBot [3D printer] just beat them all in terms of ease of use because I’m a big fan of the auto-leveling and the prints are really easy to remove and there’s virtually no maintenance right now,” Goralczyk said. “It’s been really smooth [and] I’m totally impressed.”

The fact that LulzBot 3D printers are Free Software and Open Source Hardware is also helpful.

“I’ve had a great time just looking at the assembly instructions and to see how much effort went into engineering [LulzBot 3D] printers,” Goralczyk said. “I think just getting that clarity is really important.”

Sharing information is at the heart of the Blender Institute and is a reason for the success of the 3D printing industry as a whole.

“The 3D printing community is really big right now, and there’s lots of people making tutorials with 3D printing and specifically with LulzBot [3D printers],” Goralczyk said. “I’m really amazed to see what people can get out of it, and the community is so strong and powerful right now. That’s one of the big driving factors. People should go into 3D printing because it’s a community effort and we can all just collaborate.”

Learn How Others Use LulzBot 3D Printers ➡

Disclaimer: Aleph Objects, Inc. is a partner and supporter of the Blender Institute.